On May 5, 2022, in a speech in London, U.K., the Kishida Cabinet announced that it would promote Web 3.0 as a national strategy. One essential keyword in Web 3.0 is "non-fungible token (NFT)." The cumulative market cap of NFT reached $17.6 billion in 2021, 200 times larger than the previous year. The market is expected to continuously grow, but what exactly is NFT technology and how is it used? We will go through in this article. 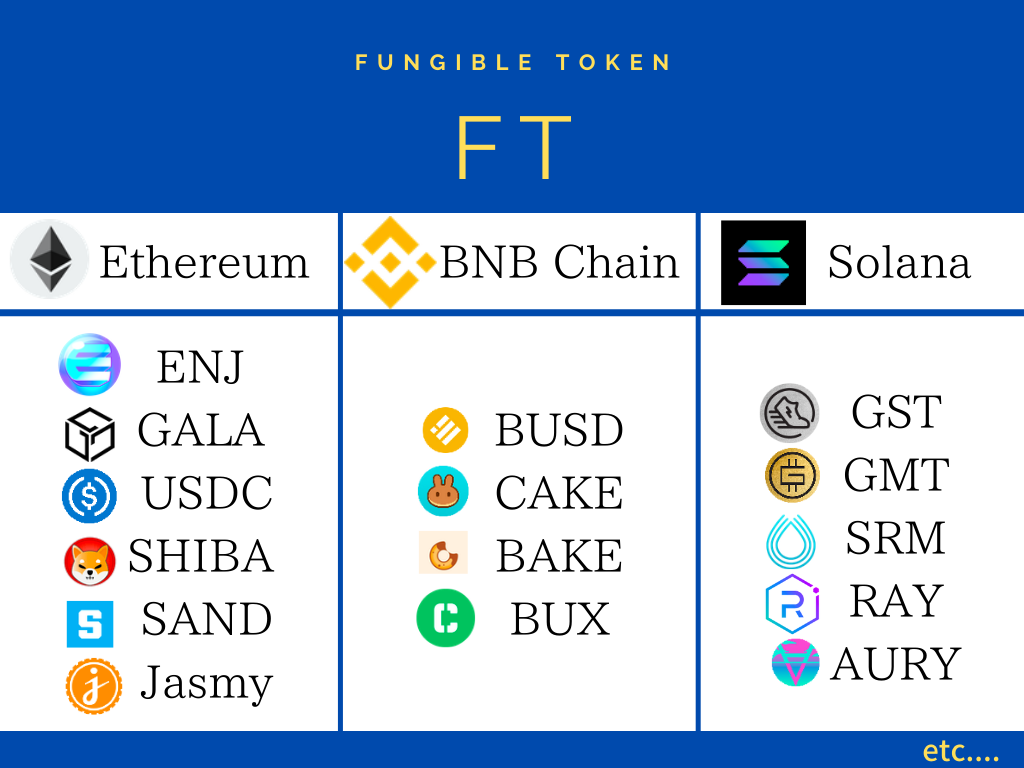 There are currently various projects using NFT. We listed popular NFT projects for each chain below.

The information of NFT is written on blockchain. They can be viewed by anyone and cannot be manipulated. Therefore, recording data as verifiable NFT as to who issued it and when, the data becomes unique and scarce. In the past, digital data was worthless because it could be copied thus the supply was unlimited, but now with NFT, the supply is limited, and its market value is realized.

It is also possible to create a system in which royalties are distributed to the creators when NFT is distributed in secondary markets. This system realized on blockchain which brokers does not exist, can reduce unfair commissions by brokers and protect the rights of artists.

Use case of NFT

The most common case where NFT is currently used is art. By making inherently copyable digital art to a NFT, uniqueness is realized, and market value is generated. In fact, in 2021 Mr. Beeple's work "Everydays: the First 5000 Days" was sold for 38,525 ETH (approximately 7.5 billion yen) in an online auction at Christie's, the world's largest auction house. The headline NFT sold at the world's highest price at the world's largest auction house went viral and helped spark the NFT bubble. 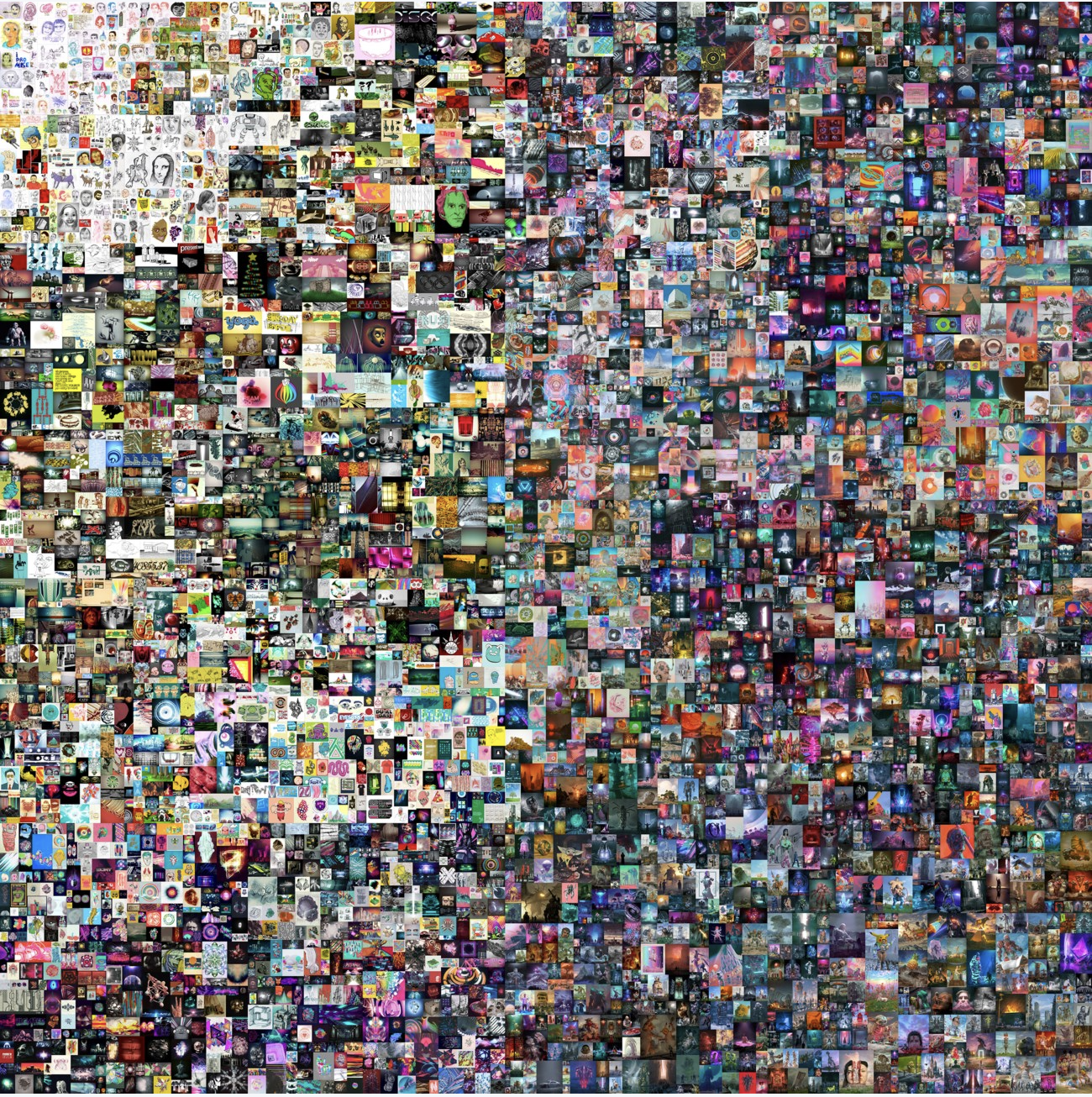 Not only art-wise but game-wise, we often see phrases like NFT games, blockchain games, and GameFi from last year. While the cash inflow for gaming was transitory in the past, now NFT is giving rise to new behaviors of gaming, as game items can now be treated as NFTs (assets).

CryptoKitties, one of the oldest NFT games, lead the boom. This game is a collection game in which NFT cats with various characteristics are mixed to create new ones. Game items have liquidity since they are tradable as NFT, and scarce cats are sold at high prices. This is the difference that NFT brings to gaming. The boom in NFT games such as CryptoKitties has gone viral with players making millions a month playing the game, or people in developing countries starting to make a living from the game.

Metaverse does not have a concrete definition. For example, Minecraft, acquired by Microsoft, is viewed as metaverse. One of its features is that in Minecraft, various users can create their own virtual spaces and move to and from each other. Until then, things obtained in virtual spaces (e.g., online games) were not compatible with other virtual spaces.

For example, The Sandbox has a use case like real estate. If property in virtual space is sold as NFT, they could be rented or they could receive capital gain when revenue is generated. Even in traditional games, we can expect possibilities like selling properties in Minecraft.

Metaverse is still at its developing days, but it has the potential to change our lives.

The spread of membership use case

More recently, some NFT work as a membership. They invite owners to participate in exclusive communities, use exclusive tools, etc. The Bored Ape Yacht Club (BAYC), created by Yuga Labs, is one of them representing this feature. They have a Discord server exclusive for BAYC owners. Many celebrities such as Madonna and Justin Bieber are members of this community. Owners receive a variety of benefits, including early access to the project and free offers of new NFT. On March 18, 2022 a governance token called APE was distributed to NFT holders. Approximately 150 million tokens were distributed, with a market value of approximately 134.5 billion at the time of this article.

APE Coin is a governance and utility token within the APE ecosystem, and BAYC has stated that it will use APE Coin as a primary token in its upcoming projects. In fact, in BAYC's metaverse project "Otherside," property sale was conducted in APE coins. Owners have the right to vote for governance based on the number of coins they own. BAYC+MAYC holders constitute 62% of the total supply, while "Yuga Labs," the company that launched BAYC, constitute only 16%. APE owners will therefore be able to decide the direction of the community.

This is how BAYC brand will eventually be established while the community grows. Expecting the benefits inside the community by owning BAYC, or capital gain from the value of NFT, owners actively participate in management, plan their own projects, and consequently the organization will operate autonomously. This is the major difference from the conventional organization and is referred to "Decentralized Autonomous Organization" (DAO).

We expect DAOs, a new organization where NFT are used so that participants are fully engaged when managing their communities, will become common in the future.

According to the graph from "THE BLOCK from CryptoSlam", Ethereum's current share of the NFT market remains dominant at 80-90%. If the upcoming update, "The Merge," resolves scalability issues such as gas prices, we are sure Ethereum will remain as the dominant player. 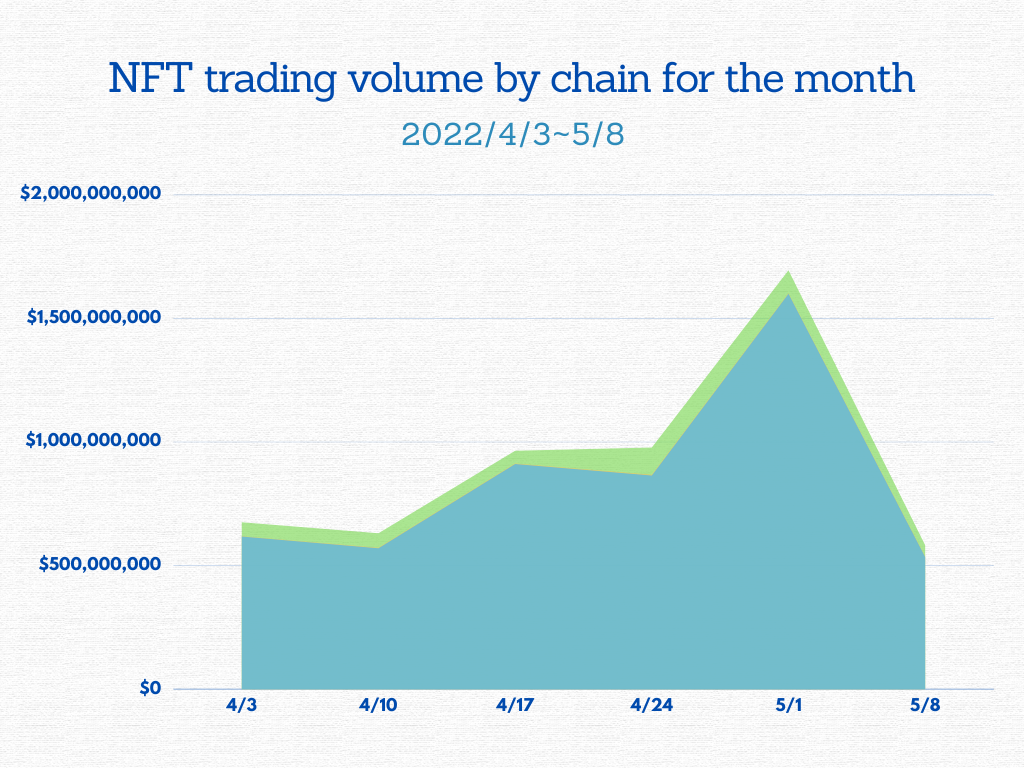 There are many factors that have contributed to Ethereum's success in gaining such a large market share, but one feature that is distinctive is its level of security. Blockchain security is roughly determined by the number of nodes and its algorithms. PoW tend to have more nodes, and incremental node makes the system more decentralized and robust. 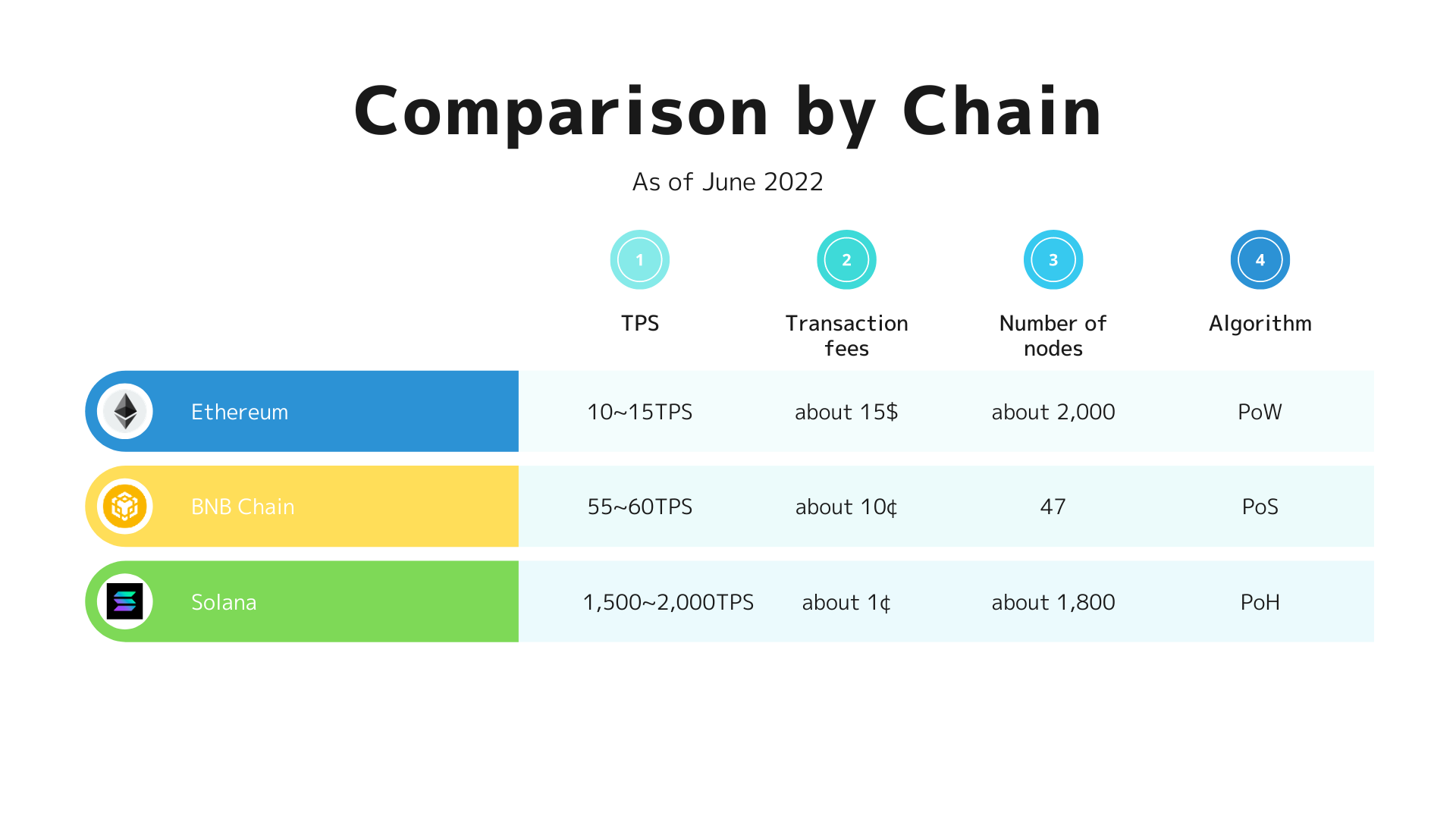 You can trade NFT in a placed called marketplace. Up to present, the dominating platform is OpenSea. OpenSea accounted for 90% of the total transaction until 2021, but from 2022, a marketplace called LooksRare has been expanding its market share. 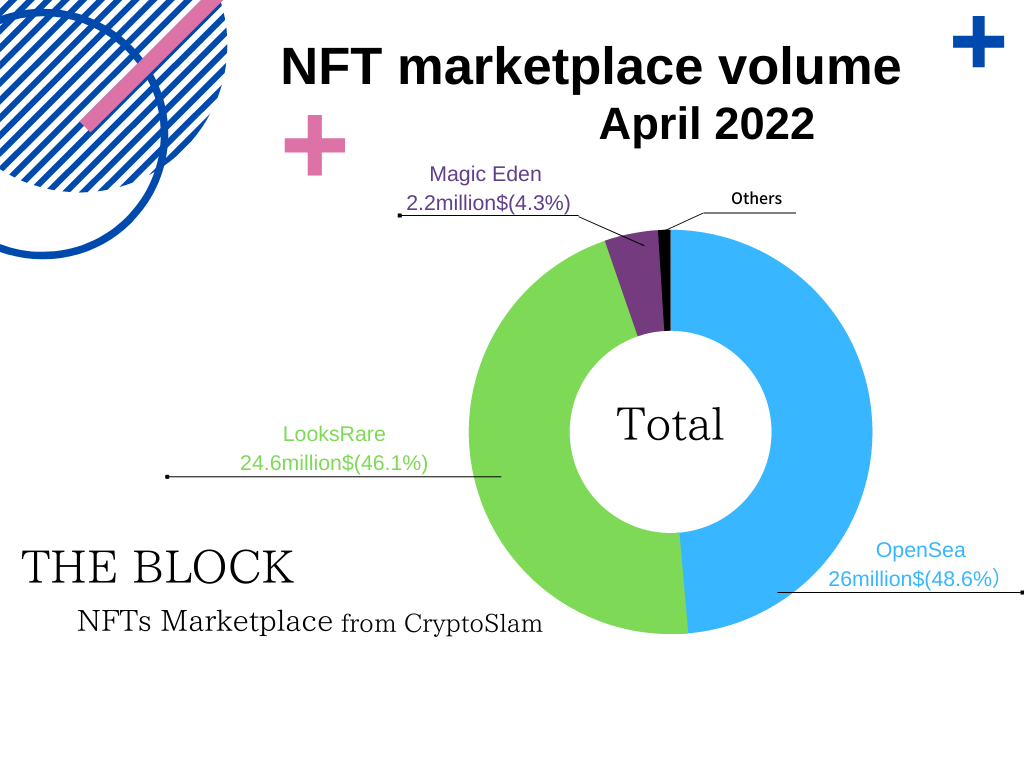 Opensea and LooksRare have two things in common: they both support Ethereum, and it is open for anyone. This makes it easier to raise funds with NFT and this feature attract many projects to OpenSea.

So here is the recap. As we went through in this article, it has become clear that NFT is a new digital asset. NFT is the core technology of blockchain, and in the coming Web 3.0 movement many NFT native services is expected the arise.

However, it is also true that at this point, there are many people who are skeptical of Web 3.0 services. In the future, many centralized platforms, including Web 2.0 social networking services such as Twitter and Instagram, will adopt NFT, and therefore NFT and cryptoassets will gradually gain publicity. We regard groundbreaking decentralized web services to be accepted naturally in our lives.

The NFT industry is a fast-paced environment in which many different projects are launched on a monthly basis. It may be a good idea to have a look and actually buy NFT at OpenSea or other marketplaces, as well as joining the NFT community to have a better understanding.