DAO (Decentralized Autonomous Organization) is an organization in which people with the same objectives are geographically dispersed and each act autonomously to promote business without a specific owner or manager.

DAOs are characterized by the following three points.

This article summarizes the definition, types, and examples of DAOs. Although DAOs are not familiar to us at this time, it is highly likely that DAO-like organizations will increase in the future, thus it is useful to accumulate insights from now.

Defining DAO by center and edge

When you hear the term DAO, decentralized autonomous organization, it may be difficult to get an image of what kind of organization it is. DAO may seem like a bit of a buzzword, and with so many different definitions of DAO, it is difficult to determine which one is the correct definition. Let's go back to the origin and look at the definition of DAO proposed by Ethereum founder Vitalik Buterin in 2014. 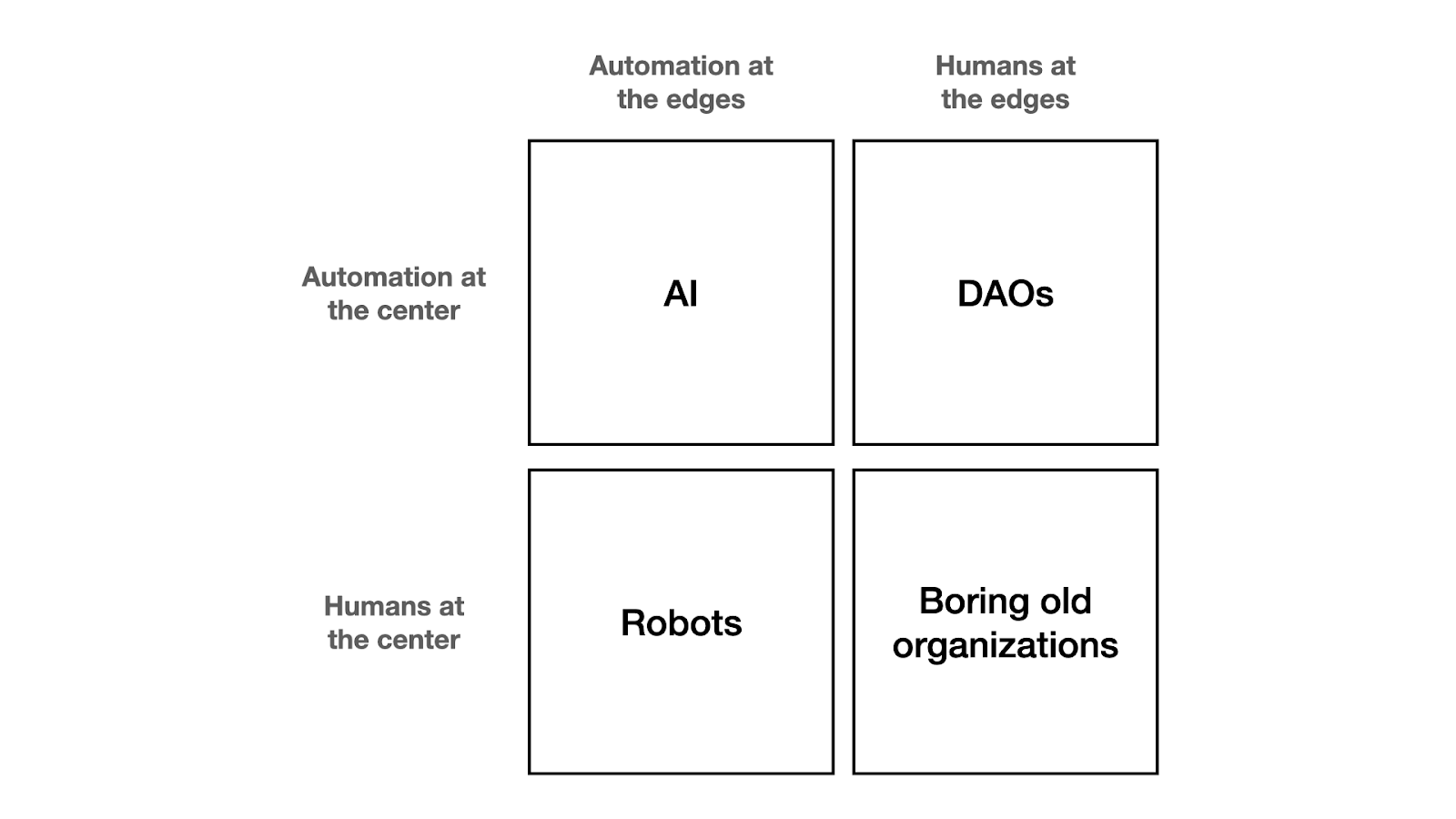 Created by the author based on DAOs, DACs, DAs and More: An Incomplete Terminology Guide

The figure above was created by the author based on the schematic diagram of DAO Vitalik Buterin presented in 2014. DAOs are characterized by the following two features.

The center here can be read as "decision-making" and the edge as "specific tasks". In other words, in DAO, decisions are made based on algorithms, and the specific tasks resulting from them are handled by humans. DAO does not mean that all activities are automated.

In DAO, specific work by participants is valued as contributions, and they receive rewards in form of tokens. Contributions can take various forms, and there will be many scenes in which strengths that were not valued in the existing paradigm can be utilized. In the future, people will be able to make a living doing what they love and are good at in a lean way of working, such as moving around several DAOs.

The three categories of DAO by authority distribution

There is no need to think which of these are truly correct. This is because which type of DAO fits the situation will vary depending on the context. For example, if quick decision-making is required, (3) would be superior instead of (1). On the other hand, if more democratic decision-making is needed, then (1) may be more attractive instead of (3).

Joichi Ito is involved in developing web3 projects as chief architect at Digital Garage, Inc. He also serves as the director of the Center for Transformation established by the Chiba Institute of Technology. He leads the DAO "Henkaku," which issues HENKAKUs with no monetary value but provides community membership, votes on proposals, and engagement to project management. The HENKAKU Membership NFT, which is a DAO membership card, was used as authentication in the IRL meetup HENKAKU BAR.

Joichi Ito, who has been active as an entrepreneur since the dawn of the Web, mentions that the atmosphere of Web 3.0 is like that of when the Internet first appeared. This may be because ordinary people could achieve freedom by new technology. At Henkaku, the team is conducting many experiments towards the goal of creating a DAO that values diversity and allows its members to contribute what they like to do. As a DAO from Japan, "Henkaku" is one of the DAOs to follow up.

DAO is the democratization of decision making

We went through DAO in this article, but we think it will be difficult for DAOs to immediately disrupt traditional organizations and become widely adopted. This may be because of the user experience, or because the technology supporting DAO is not yet mature and has not been theorized. However, DAO is the democratization of decision-making, and it is certain that DAO will gradually spread through the world while coexisting with traditional organizations.